Live from the Bilderberg Meeting in Chantilly, Virginia

Kalma and I are in Virginia with fellow dreamers of freedom to rally in front of the annual Bilderberg Meeting, an invite only event attended by the most diabolical and sinister social engineers that receives no mainstream media coverage.

We will be performing live at Bilderberg tomorrow, propelling our music using a battery-powered, fascist-destroying, sound machine.  Live stream, photos and videos to be added when available, check back!

In the meantime, check out news and videos from the weekend over at We Are Change, Infowars and be sure to read this article courtesy of Prisonplanet. 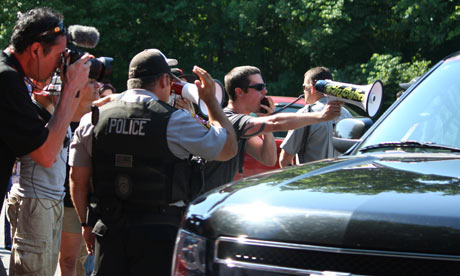 While the representatives of every major international organization on the planet meet in a hotel in Virginia, the corporate media is reporting that Justin Bieber knocked himself out by walking into a door

Detractors routinely contend that the annual elite Bilderberg meetings are nothing more than an outdated irrelevant get together of aging has-beens whose power on the international stage has long since withered.

Take one look at the attendees at this year’s confab in Chantilly, however, and it immediately becomes clear that this is the absolute polar opposite of the truth.

Debating policy at this year’s meeting will be Eric Schmidt, Executive Chairman of Google, Craig J. Mundie, Chief Research and Strategy Officer at Microsoft Corporation, and Reid Hoffman, Co-founder and Executive Chairman of LinkedIn. Another notable attendee is Peter Thiel, head of Clarium Capital, who provided the financial muscle for online ventures like Facebook and Paypal, as well as LinkedIn and Friendster.

There you have luminaries involved with some of the biggest online and social media companies on the globe, all in attendance together at a secret weekend getaway.

That alone should be enough to focus the attention of the mainstream media.

Alas, apparently, no, that is not enough to perk their collective interest, because Bieber walked into a door.

Continue reading over at PrisonPlanet.com.

The next round of recording begins…

Welcome to my new website, take a look around…