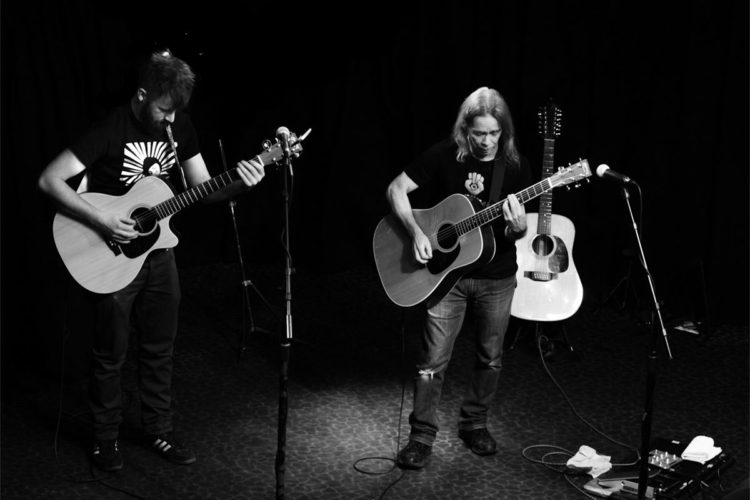 “A lot of guitarists can play a lot of stuff. I want to FEEL something.”
– Tim Reynolds

A crisp, January evening. Cold enough to freeze snot to my mustache. I was in the Elucidator offices pacing the floor. Rumor has it they just brought Dustin Schoof on staff and that could only mean one thing: Sayonara, Carter.

I know Schoof. He’s a legit journalist. He’s a nice guy. He turns in his assignments (like the interview with comedian Dave Attell on page 16) on time and without coffee stains and gum on them. There was clearly not room enough for BOTH of us on this magazine. Which meant only one…which meant a SECOND thing: Dustin was going to have to engage me in single combat and take my head in order to assume his proper place. It’s how I won the Column from Ryan Woodring. It’s tradition. Like hiding the Bugler behind a giant phallus every year. Or complaining about parking. It’s what we do.

I am no fighter. But I am of Scots-Irish decent which means if I get drunk enough, I can be convinced that I am much braver than I truly am. So, I opened a bottle of Yamazaki 12 and went to it. Schoof didn’t stand a chance.

The phone rang. It was my intended adversary.

“Schoof, I am preparing to kill you. Why are you calling me?”
“Um, Carter, I need your help. You see, there’s this Goat. And. He. Well, he’s kind of untrustworthy. I am in a bit of a bind, buddy. Wait. Why are you going to kill me?”
“Because you want to take my Listen column away from me.”
“I assure you, I want no such thing. I’m calling to give you your assignment.”
“Wait, I thought you were calling about a goat?”
“Never mind that now. I need you to go to Havana.”
“Cuba?”
“No. New Hope.”
“Is that in Jersey?”
“No. That’s Hope.”
“Why am I going there?”
“You are going to interview Tim Reynolds.”
“Sweet.”

Clearly this was a ruse. A ploy. A bit of flimflammery designed to get me out of Easton long enough for Schoof to have me bumped. Was The Goat just a code name for his hired assassin? Was Tim Reynolds part of the Plan? There was only one place I could go to find my answers. Havana.

If they wanted to back me into a corner, it was going to be one messy corner. And smart to choose New Hope. Keep the mess out of Easton. Very clever, Schoof.

Either way, this was another in a long line of great interviews set up by my Editor Dawn. Meeting the mastermind lead guitar player for Dave Matthews Band, would be a very nice feather in my cap, even if I was risking life and limb to get it. The Elucidator sent our intern Cassie along as a photographer. I assumed that they warned her of the danger. Despite her pixie-like appearance, I have heard she can kill a man with a swizzle stick. I think that’s what happened to our old intern, Merv.

Sitting on a couch in the lobby of Havana when a sudden wisp materializes like Nightcrawler.

The three of us dodge past security and find a secluded corner of the room.

CL: “Ok, Dave, I need to know. Why are you here? How are YOU a part of this?”
DC: “About 10 years ago I forced my way onto the stage and opened for Tim. We’ve been friends ever since.”

CL: “You certainly run in some pretty serious circles, man. You hang with Alex Radus, Tim Reynolds, you are surrounded by some crazy talent.”
DC: “I like to make friends with people I look up to.”

CL: “But, honestly, Tim, people call you a genius, a wizard, how does that make you feel?”
TR: “How about just ‘asshole’?”
DC: “Or Trans-species Inter-sphinctorial Moon Muffin?”
TR: “Yeah, that’s good.”

CL: “Aside from the 30 dates you have booked through March 2016, what else are you up to?”
TR: “I’ve got an acoustic record in the works, I’m recording it when I’m not playing.”

CL: “How do you like touring?”
TR: “Well, you have to work. It’s good to travel, and to play music. There are all kinds of things you can complain about. But, that’s just life. I get to make mistakes all over this flat earth of

CL: “What are you listening to now, and you do you find new music?”
TR: “Random discovery. I just found this band called Rival Sons. But mostly I’m listening to Guantanamo Bay Torture Music. Also, Shostakovich, and Bartok string quartets.”

CL: “So, what are your influences?”
TR: “Well, every decade there’s like five of them. I listen to all kinds of stuff from the 70’s, the 90s, Nine Inch Nails, Skinny Puppy, Industrial Metal, Aphex Twin. I’m really into Indian music. ”

CL: “I read about how you taught yourself to play sitar, how did that happen?”
TR: “I was in a room and there was a sitar with one string and I played around with it. Randomly, a friend of mine had one and gave it to me and I taught myself to play. But, I was poor then so I had to sell it to buy something else. Probably another guitar.”

CL: “How do you continue to stretch, to grow as an artist?”
TR: “Music is food. You absorb it. I like to write parts that I can’t play so I have to work it out.”
DC: “Melody is just mathematics. It’s a balance of the science and the soulful.”
TR: “A lot of guitarists can play a lot of stuff. I want to FEEL something.”

CL: “So, what’s next?”
TR: “I just want to do what I’m trying to do now. Just make up music on acoustic (guitar). Maybe five years from now something else will happen.”

With that, Dave Cahill blew a cloud of vapor in my face and they vanished. Except for a pair of glasses and a single fingerless glove.

I looked at Cassie. “Did you get any of that?”

She tapped her camera and grinned.